The Dangers of the Inbox 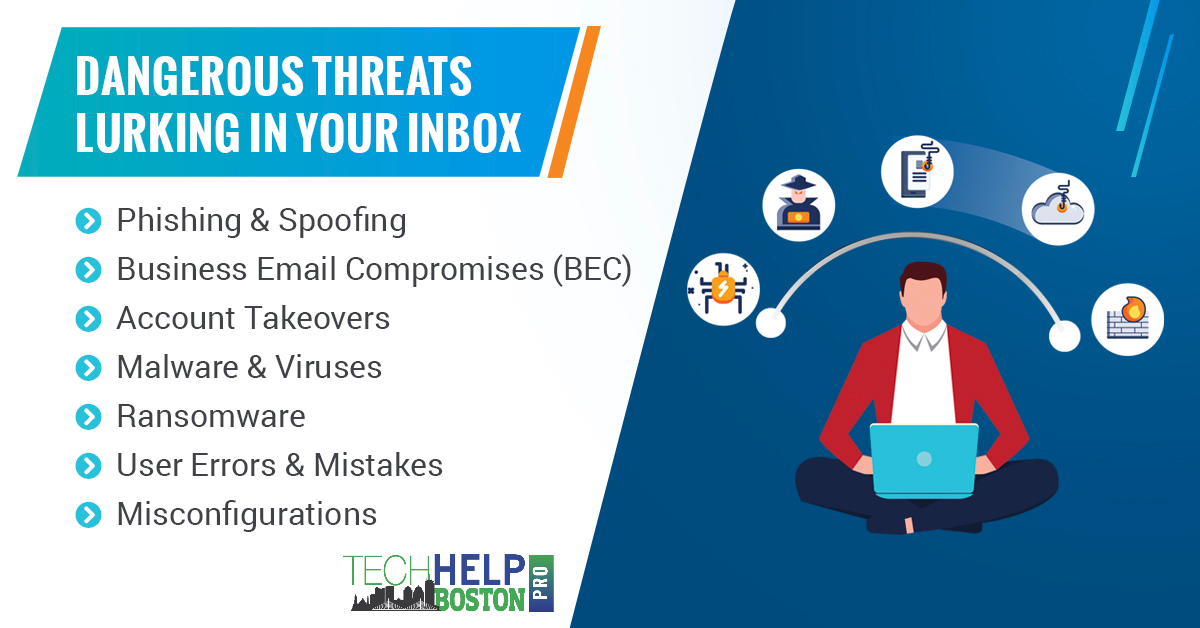 Every now and then, an email with a catchy subject line appears in your inbox and you end up clicking on it, either because you’re curious about the subject line or because you assume the sender is trustworthy. Unfortunately, this is how most cyberattacks tend to begin – with a single click. What unfolds next only puts your security and the security of your business in grave danger.

Whether you clicked on a link or the unsubscribe button in the email, you would have potentially opened the floodgates to the possibility of single or multiple cyberattacks that could hold your business’ future hostage. According to ProofPoint’s Human Factor 2019 report, more than 99 percent of cyberattacks require human interaction to succeed. That’s why email security should be at the very top of your business’ cybersecurity concerns.

This blog will help you understand how cybercriminals use emails as their weapon of choice, what are the top cyberthreats making their way into your inbox every day, and how you can launch a robust counterattack of your own.

The Art of Cyber Deception

There’s a greater psychological undercurrent to cyberattacks than you might think. Cybercriminals are hitting their targets by deceiving you and making you act irresponsibly, and in the midst of the Covid chaos, more consistently than ever before.

They are constantly developing and deploying sophisticated social engineering tactics to fool unassuming recipients. “They quickly adapt and keep the number of targeted users low. This makes it really hard to detect,” explained Elie Bursztein, (Leader Google’s anti-abuse research team), from observations of how attackers have been updating their designs to make them more efficient.

Cybercrime is constantly evolving to match advancements in technology. Being overconfident about your defenses or defensively underprepared is certainly not a viable stance anymore. It’s time to adopt a proactive approach rather than a reactive one to counter this deception.

Cyberthreats That Infiltrate Your Inbox Regularly

Before we talk about how you can build a formidable defense against email attacks, let’s take a look at the top cyberthreats that frequently make their way into your inbox and wreak havoc.

Phishing involves hackers deploying various social engineering tactics to tempt users into clicking on malicious links and unwittingly giving up confidential information, such as user credentials. Hackers invest a tremendous amount of effort into assuming the identity of a trusted source, making sure that it is YOU who lets them into the system. Once they’re in, they can either install malware on your network’s systems, access and misuse sensitive data, or simply lock your systems and demand a hefty ransom.

Data suggests that this menace is only growing stronger. Verizon’s 2020 Data Breach Investigation Report stated that 22 percent of all breaches in 2020 involved phishing. The fact that even well-informed users fall prey to such attacks adds to this conundrum. In a study conducted by BullPhish ID, it was observed that 18.6 percent of users that clicked on simulated phishing campaigns demonstrated a willingness to submit credentials or requested data.

In a business email compromise (BEC) scam, the attacker hacks into your business email account to impersonate employees or any of your organization’s important leaders with intent to defraud your company and its stakeholders into sending money or sharing sensitive data. Spear phishing works in a similar fashion wherein the attacker dupes the user by creating a façade that the malicious email originated from a trusted source.

A GreatHorn report stated that BEC attacks ballooned by nearly 100 percent in 2019. If you want to get a fair idea about the damage a BEC scam can do to your business, take a minute and think of the massive financial and reputational loss your business would suffer if an attacker impersonates you and carries out fraudulent activities in your name.

Let that sink in as we move on to the next threat.

Taking identity impersonation one step further, account takeovers exploit your compromised user credentials to target both your business’ and your financial stability and reputation. Cybercriminals can go to the extent of accessing other accounts, such as bank accounts and financial statements, to carry out fraudulent transactions. The 2020 Global Identity and Fraud Report by Experience revealed that 57 percent of enterprises reported higher fraud losses due to account takeovers.

Simply put, the attacker will not just target your business, but utilize it as a gateway to also exploit customer data simultaneously.

Although used interchangeably, malware and viruses differ on technical grounds. Malware refers to any type of malicious software, irrespective of how it works, but a virus is a specific type of malware that self-replicates after entering other programs. Nonetheless, both pose an enormous threat to your business’ IT environment.

CSO Online revealed that 92 percent of all malware is delivered via email and that’s why we’ve included it in our list. As mentioned earlier, all it takes is a simple click for an attacker to gain access to your network’s systems and plant malware or a virus.

A ransomware attack occurs when a hacker breaches your network’s security, encrypts your data and demands a hefty ransom for the restoration of that data. Now imagine your business coming to a complete standstill until you pay the ransom demanded. Not a pretty picture by any means!

Investigations performed on previously confirmed Ransomware attacks to date, have not shown definitive evidence of theft or exposure of data, only the encryption. However, to add to the ongoing chaos that is 2020, within the last year, there has been change up in the behavior of Ransomware hits. These cyber bullies have changed tactics and are now claiming to EXFILTRATING COPIES of business DATA BEFORE encrypting it! They are then leveraging an additional blackmail threat to include exposing the data if the ransom demand is not paid.

Even if you opt to pay the ransom, you have no guarantees the attackers would provide the means to decrypt and restore data,  nor can you be certain the data will not be sold, exposed or targeted for a direct attack at some later date.

Insider threats are posed by individuals within your organization or closely related to it, such as current or former employees, vendors and partners. Acting unwittingly or out of malice, they can easily let an attacker into the system, leaving all your sensitive data exposed.

In fact, according to Verizon in their 2020 Data Breach Investigation Report, over one-third of data breaches worldwide involved internal actors. An Egress study revealed that 31 percent of employees have mistakenly sent an email containing sensitive data to the wrong person.

While your confidence in your employees is well-founded and justified, we ought to remind you – to err is human!

Last but certainly not the least deadly, misconfigurations in your email platform can expose your network to a host of threats. For example, it could allow the sending of emails without authentication. We’re pretty sure you know what would happen if a cybercriminal exploited this vulnerability and sent out emails impersonating anyone from the company’s executive level. Before you know it, you’d be knee deep in managing a full-blown PR crisis.

It’s Time to Engage All Defenses

A cyberattack takes place almost every 39 seconds (or approximately 2,240 times a day, as per the University of Maryland). That’s exactly why the time to upgrade your email security is NOW. Your business needs to get on the offensive with a two-pronged approach – implementing the best cybersecurity solutions and providing your employees with extensive security awareness training.

Now is the time to implement preventative solutions for endpoint security and backups, identity and access management, automated phishing defense, Dark Web monitoring and security awareness training. While a 100 percent fail-safe approach to cybersecurity isn’t a reality just yet, we can certainly walk you through a list of best practices that will hold you in good stead for the future.

Let’s talk about them today.