Advantages of Work From Home Strategies For Companies 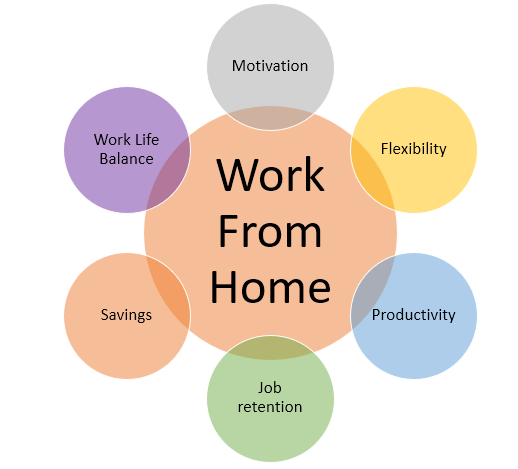 Here are the most common advantages for the companies that establish such strategies. The following pros and cons of work-from-home programs aren’t just our views; they’re the outcomes from a wide range of studies.

– People are sick of the rat-race, eager to take control of their lives, and desperate to find a balance between work and life.
– Two-thirds of people want to work from home.
– 36% would choose it over a pay raise.
– A poll of 1,500 technology professionals revealed that 37% would take a pay cut of 10% if they could work from home.
– Gen Y’ers are more difficult to recruit (as reported by 56% of hiring managers) and to retain (as reported by 64% of hiring managers), but they are particularly attracted to flexible work arrangements (rating among benefits as an 8 on a 10 scale for impact on overall job satisfaction).
– 80% of employees consider telework a job perk.

– 78% of employees who call in sick, really aren’t. They do so because of family issues, personal needs, and stress.
– Unscheduled absences cost employers $1,800/employee/year; that adds up to $300 billion/year for U.S. companies.
– American Management Association, organizations that implemented a telework program, realized a 63% reduction in unscheduled absences.
– Teleworkers typically continue to work when they’re sick (without infecting others).
– Teleworkers return to work more quickly following surgery or medical issues.
– Flexible hours allow teleworkers to run errands or schedule appointments without losing a full day.

– Best Buy, British Telecom, Dow Chemical, and many others show that teleworkers are 35-40% more productive.
– Businesses lose $600 billion a year in workplace distractions.
– Over two-thirds of employers report increased productivity among their telecommuters.
– Sun Microsystems’ experience suggests that employees spend 60% of the commuting time they save performing work for the company.
– AT&T workers work five more hours at home than their office workers.
– JD Edwards teleworkers are 20-25% more productive than their office counterparts.
– American Express workers produced 43% more than their office based counterparts.
– Compaq increased productivity 15-45%.

– Hiring sight unseen, as some all-virtual employers do, greatly reduces the potential for discrimination.
– It ensures that people are judged by what they do versus what they look like.
– Communications via focus groups, instant messaging, and the like equalizes personalities. No longer is the loudest voice the one that’s heard.

• Cuts down on wasted meetings

– Remote work forces people to be more independent and self-directed.

– Once telework technologies are in place, employees and contractors can work together without regard to logistics. This substantially increases collaboration options.

• Provides new employment opportunities for the un- and under-employed

– Eighteen million Americans with some college education aren’t working.
– More than 12% of the working-age population are disabled (16 million). A full three-quarters of unemployed workers with disabilities cite discrimination in the workplace and lack of transportation as major factors that prevent them from working.
– 24 million Americans work part-time.
– Only 75% of women, still the traditional primary caregivers age twenty-five to fifty-four, participate in the labor force (compared to 90% of men). Almost a quarter of women work part-time (16.5 million), compared to 10% of men.

– Over 40% of employers are feeling the labor pinch; that will worsen as Boomers retire.
– Reduces geographic boundaries.
– Provides access to disabled workers.
– Offers an alternative that would have otherwise kept parents and senior caregivers out of the workforce.
– Offers geographic, socioeconomic, and cultural diversity that would not otherwise be possible.
– Over 70%of  employees report that the ability telecommute will be somewhat to extremely important in choosing their next job.

• Slows the brain-drain due to retiring Boomers

– 75% of retirees want to continue to work – but they want the flexibility to enjoy their retirement.
– 36% of retirees say the ability to work part-time rather than full-time, or to work from home would have encouraged them to keep working – even if it didn’t provide health benefits or meant a temporarily reduced pension.
– 38% of surveyed retirees indicated that being able to work seasonally or on a independent contractor basis would have encouraged them to delay retirement.
– 71% of retired workers who later decided to go back to work, originally retired because of a desire for more flexibility than their job offered.

– Having access to a flexible at-home workforce allows call centers, airlines, and others to add and reduce staff quickly as needed.
– The need to overstaff ‘just in case’ is greatly reduced.
– 24/7 worldwide coverage is easier to staff with home-based help.

• Environmentally friendly policies are good for companies
– Sun Microsystems reported that its 24,000 U.S. employees participating in the Open Work Program avoided producing 32,000 metric tons of CO2 last year by driving less often to and from work.
– Office equipment energy consumption rate is twice that of home office equipment energy consumption.
– 70% of employees report they would see their companies in a more favorable light if they helped them reduce their carbon emissions.
– 24% of employees say they’d take a pay cut of up to 10% to help the environment.

– If traffic continues to grow at the current pace, over the next couple of decades drivers in Atlanta, Baltimore, Chicago, Denver, Las Vegas, Miami, Minneapolis/St. Paul, Portland, San Francisco-Oakland, Seattle-Tacoma, and Washington, D.C. will be sitting in daily traffic jams worse than the infamous traffic jams that plague Los Angeles eight hours a day.
– As a result, commutes will take almost twice as long and you’ll have to leave even earlier to allow for traffic jams if you have to arrive someplace at a specific time, producing a further reduction to our national productivity.
– Traffic jams rob the U.S. economy of $78 billion/year in productivity.
– Traffic jams idle away almost three billion gallons of gas and accounts for 26 million extra tons of greenhouse gases.
– Every 1% reduction in vehicles yields a three-fold decrease in congestion.

– Half-time telework, for the portion of the population that holds telework-compatible jobs and wants to work from home, would save more than 1,600 lives, prevent almost 99,000 injuries, and save over $12 billion a year in direct and indirect costs associated with traffic accidents.

• Takes the pressure off our crumbling transportation infrastructure

– New roads are being built to meet needs of ten to twenty years ago. Less than 6% of our cities’ roads have kept pace with demand over the past decade.
– By 2025 we’ll need another 104,000 additional lane miles – that will cost $530 billion.

• Ensures continuity of operations in the event of a disaster

– Federal workers are required to telework to the maximum extent possible for this reason.
– Bird flu, terrorism, roadway problems, and weather-related disasters are all drivers.
– Three-quarters of teleworkers say they could continue to work in the event of a disaster compared with just 28% of non-teleworkers.

– Drucker, Six Sigma, and management experts agree that goal setting and performance measurement is key to successful management.
– For telework to work, employees must be measured by what they do, not where or how they do it.

– A number of states, including Virginia, Georgia, and Oregon offer financial incentives for businesses to adopt telework. Other states including Arizona, Vermont, Washington, and Connecticut offer free training to encourage companies to give it a try.

The Obstacles To Work At Home and Telecommuting Programs

– 75% of managers say they trust their employee, but a third say they’d like to be able to see them, just to be sure.
– Company culture must embrace the concept at all levels; sweatshop and typing pool mentality has to be abandoned.
-From Peter Drucker’s introduction of Management-By-Objectives in the mid-1950’s, to Six Sigma which was popularized by General Electric’s Jack Welch in the 1990’s, setting and measuring goals has long been held as the key to good management.

• It’s not for everyone

– For some, social needs must be addressed. Telephone, email, instant messaging are a solution for some. Innovative solutions such as virtual outings, online games, and even Second Life have proven successful as well. Occasional telework is also a solution.
– Telecommuters must be self-directed.
– They should be comfortable with technology or arrangements should be made for remote tech support.
– They should have a defined home office space.
– Home-based employees need to understand that telecommuting is not a suitable replacement for daycare unless they can schedule work hours around their children’s needs.

• Career fears from ‘out of sight, out of mind’ mentality

– Some employees cite career fears as a reason not to telecommute. Successful teleworking programs overcome the ‘out of sight, out of mind’ issue with performance-based measurement systems, productivity versus presenteeism attitudes. Teleworkers who maintain regular communications (telephone, email, instant chat, even the occasional face-to-face meeting) with traditional co-workers and managers find career impact is not an issue.

– Employees need to understand why they were or were not chosen for telework.
– Employees should see telework as a benefit that is earned, not given.
– Standards of selection should be uniform.

– Almost 93% of managers involved in IRS pilot telework program believe there is no problem with data security.
– Security issues are easy to solve, but must be addressed.
– 90% of those charged with security in large organizations feel that home-based workers are not a security concern. In fact, they are more concerned with the occasional work that is taken out of the office by traditional employees who lack the training, tools, and technologies that teleworkers receive.
– Security training should be provided for all employees.

• IT infrastructure changes may be necessary

• Collaboration concerns
– Some managers feel that distance inhibits collaboration. They need the ‘energy in the room’ when a crisis occurs.

• Double-taxation
– Some cities, notably New York, impose taxes on home-based workers whether they work in the city or not. A Connecticut resident who works at home for a New York company owes taxes to both states.

• Employment law and OSHA concerns
– A few recent accidents in the homes of teleworkers has raised concerns about employer liability.
– The inability to monitor employee overtime is also an issue.