What’s the Difference between Windows Vs. Android Vs. iOS? 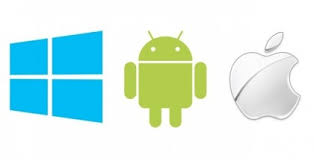 As you may already know: Windows, Android and iOS are the top three operating systems available today on the mobile market (that’s what OS in iOS stands for). What you may not know is that the “i” at the front of all Apple product names stands for Internet.

It’s a fact worth mentioning, insofar as that’s where each these products differ from one another. Each is produced by a different developer. The iOS is an Apple product, Windows is a product of Microsoft, and Android is developed by Google.

An operating system consists of the software responsible for managing everything from a smartphone’s resources, memory, apps, and interface we use to engage with it. More importantly, the operating system acts as the platform upon which these features are built. That’s why the proprietary apps of one operating system are not going to be compatible with other operating systems — they were coded differently. You can’t incorporate Kinects into your Lego project, because the pieces won’t fit together. If you want to work with something like a Kinect, you’ll have to design its Lego equivalent. The difference among these smartphone devices fundamentally boils down to how they’re built.

Given that their parts don’t mix, Windows, Android and iOS have each developed their own, unique approaches to user-friendliness, developer capability and security standards.

Are You Trying To Make a Purchase Decision?

The truth is, the phones are all very similar to one another in terms of end product (interface, app development and security protocol) because consumers across the board have similar expectations as to what a smartphone should be.

If you’re a big user of Google services already, Android definitely makes the most sense for you. Android is the best in terms of affordability thanks in large part to its partnerships with a wide variety of distributors, like Samsung, HTC and LG. Plus, its features and interface are on par with the quality of iOS products.

If you’re a long-time Apple user, there’s no real reason for you to switch over to an Android given Apple’s seamless integration among all of its products. The only downside to Apple is the heavier price tag and its lack of customization options.

It seems as though the Windows phone is positioning itself to be the best corporate option, as its greatest selling point is its seamless integration with Microsoft 365 Office Suite. So, if you work from home or bring your own device to work, this is probably your best tool. Although, Google Drive doesn’t work on the Windows phone – so bear that in mind.

That being said, here’s a little more detail as to how exactly each phone differs from the other:

How does the phone look? How do users navigate through its features? User experience is very much a matter of personal preference.

Here, all three platforms have adopted a very similar, minimalist design with bright colors and fast-swiping, left-to-right scrolling across home screens. However, each differs greatly in the degree to which it lets users customize their home screen.

Android offers the greatest amount of personalization. With an Android, you can tuck rarely-used apps away into an app drawer, meaning, you can make it so that only the apps you use often are visible to you when you turn on the phone and swipe through your home screen.

Unfortunately, with an iOS phone, you can’t hide any unused apps, but you can organize them into folders. This de-clutters the home screen which looks very similar to that of a Macbook.

Just as an iPhone looks like a Mac, the Windows phone has adopted the same look and feel as its desktop interface. If you’re not a fan of the “Tiles” feature on the Windows home page, you won’t like the Windows phone. It’s exactly the same.

If you’ve already made the switch from iPhone to Android, but having trouble with texting, here’s how to fix that issue.

Traditionally, iOS is the most lucrative platform for developers: the Apple Store charges slightly more for its app downloads than the Google Play Store and it’s easier to develop for. Therefore, the most cutting edge apps usually appear on Apple devices first.

So, if you find an app you really like but it’s an iOS app, you may have to wait a while until the Android version is developed and released.

Unlike iOS or Windows, the Android OS is completely open-sourced, which means that any developer can access the code used to create Android apps and submit them for approval to the Android app store. Because of this, you get a greater variety of apps from the Google Play Store. However, the quality maybe not be as high and due to the lack of uniform standards among app creators (remember, anyone can develop an Android app) it may be that if you purchase a new phone, some of your favorite apps may not be transferable or compatible with it.

Windows is the youngest of the three systems and has the smallest consumer base (less than 5% market share). As a result, it hasn’t attracted as great of a developer community as exists for iOS and Android. It’s still stuck in the JV stages, whereas Apple and Android are major league.

One of the biggest security threats to mobile devices comes from the accidental download of malicious apps.

Apple is the most stringent in terms of overseeing the development of its apps. Every downloadable app, available on the Apple App Store is subject to strict security protocols – so the chances of you downloading a corrupt application from a malicious source is slim to none.

Apple also has one of the most outdated restrictions around: You can only have a maximum of 10 devices associated with your iTunes account, which includes just five computers. This is nothing more than a holdover restriction from the days when movie or song sharing was under strict limit controls. Someday, we hope, they’ll change this. For now, here’s how to remove devices from iTunes if you want to make room for other ones.

Android also does a very good job of vetting the applications in its Google Play Store, even though its system is open-sourced.

Furthermore, all three platforms are updated on a fairly regular basis, from big releases with new features and occasional redesigns every few months, to smaller releases to deal with minor bugs.

Microsoft and Apple maintain greater control over the software than Android so it’s easier for them to roll out updates in a timely fashion. However, all three do a comparable job of keeping their devices secure.

Have You Made Your Decision, Yet?

Like anything, choosing your phone boils down to personal preference. It may be that the clincher for you is going down to the store and turning each one over in your hands. And if you learn of any other differentiating factors that we’ve excluded here, let us know in the comments!

For more information on the technology pertaiing to you home visit our FAQ page, Resource Center or send us a quick chat! We’re happy to help.